Rockin Nola has nearly been perfect all season in 2021 and she added another win to her resume Saturday, June 5 at Harrah’s Hoosier Park. Driven by Joey Putnam, the pacing mare scored the win in the evening’s featured $20,000 Fillies and Mares Open with Rockin Nola handicapped to the outside post nine. 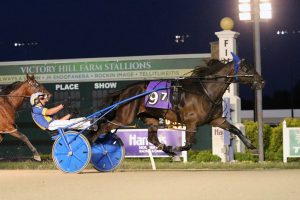 Rockin Nola left the gate with speed but was hung on the outside early on in mid pack as Dealmaker Hanover and Ricky Macomber Jr. set the tempo at :26.4 past the first quarter. By the half, Rockin Nola had reached the lead on the outside and secured the top spot soon after the halfway marker in :55.2. Around the final turn, she began to open up on the field, and increased that advantage down the stretch. She was well under wraps under the wire for Putnam with the win by two lengths in 1:49.2. Rose Run Vision and Don Eash also paced under the 1:50 time barrier to finish second followed by Bettor’s Up and LeWayne Miller who finished third.

Rockin Nola is owned by J P Racing and Suttons Bay Racing. Mahlon Lambright bred the five-year-old daughter of Rockin Image, who is now four for eight in 2021. Earlier this year, she established a new lifetime mark of 1:49.1. She now has career stats of 25 wins in 52 career starts with earnings over the $615,000 mark under the direction of trainer Joe Putnam.

Another big mile on the Saturday card was recorded by Grace Rocks and Michael Oosting in the $14,000 Fillies and Mares Open 3. Also a daughter of Rockin Image, Oosting had Grace Rocks revved up and headed to the lead out of the gate, passing over to the top just after the quarter in :26.2. From there, she had full control of the race, pacing home in :27.1 for the win in 1:49.3 by two and one-quarter lengths. Cheek Please and Brandon Bates finished second over Eyespywithmylileyen and Trace Tetrick for third.

Britney Dillon trains Grace Rocks for owner Howard Taylor. The four-year-old pacing mare earned her first win of 2021 and is now 11 for 27 lifetime. The mile was one tick off her career best taken last year at Harrah’s Hoosier Park. Grace Rocks now has in excess of $250,000 in earnings. Victory Hill Farm bred the mare.