Rockin Nola and Joey Putnam soared under the wire in the $22,000 Fillies and Mares Open Saturday, Aug. 21 at Harrah’s Hoosier Park. In doing so, they not only took a new career best mark but equaled the track record for older pacing mares set by Kissin in the Sand and Dexter Dunn in the Breeders’ Crown last year in a time of 1:48.4. 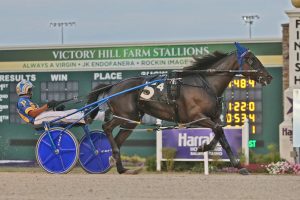 Rockin Nola and Joey Putnam were on cruise control as they stopped the timer in 1:48.4 to equal the track record for older pacing mares at Harrah’s Hoosier Park Saturday, Aug. 21. Photo by Dean Gillette

Starting from post five, Rockin Nola made her presence known early, rolling to the lead and obtaining the top spot just after the first quarter in :26.1. The tempo continued to be swift through fractions of :53.4 and 1:22.0. In the stretch, Somebodyslilly and Andy Shetler were the first to challenge on the outside followed by Genie Rockwell and James Yoder.

As the tote board came into focus for Rockin Nola, she was strong on the front end, powering under the wire by a hand drive from Putnam in 1:48.4, a final panel in :26.4. Genie Rockwell finished second while Maggie Rhee and LeWayne Miller were third. The top three finishers were all Indiana sired products and all earned times under the 1:50 time barrier in the event.

Rockin Nola was favored, paying $3.20 for the win. The five-year-old Rockin Image mare is trained by Joe Putnam and owned by J P Racing LLC and Suttons Bay Racing. Mahlon Lambright bred the mare, who is on track to have her best year ever, winning six of 14 races with only four starts off the board. Her earnings are in excess of $83,000 and her career bankroll is nearing $650,000. With the exception of her two-year-old season, she has dipped under the 1:50 time barrier every year of action, setting a new career best of 1:49.1 earlier this year before her record setting effort Saturday.

Rockin Nola is the star of her family. She is out of the Keystone Raider mare Gottogetoutmore, who took a mark of 1:52.2 during her career and made over $200,000. She has a three-year-old half-brother, Out of Amera, who is racing this season and a four-year-old half-sister, Virg It Is, who started last year. Rockin Nola also has a full brother, Jeopardy, who took a mark of 1:51.2 during his racing career.

Rockin Nola was a $15,000 yearling purchase from the Hoosier Classic Yearling Sale. She sold under the name Go More Rosey. She was one of 69 foals sold that year at auction by Rockin Image.