After just missing a check in the Breeders Crown for older pacing mares, Rockin Nola and Joey Putnam were back in the winner’s circle Saturday, Nov. 14 in the $18,000 Fillies and Mares Open Pace at Harrah’s Hoosier Park. The four-year-old mare has now won seven of her last 10 starts as Indiana pari-mutuel racing comes to a close next Saturday. 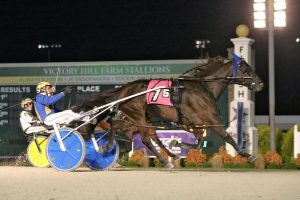 Rockin Nola and Joey Putnam, shown winning earlier this season at Harrah’s Hoosier Park, were back in the winner’s circle Sat. Nov. 14 in the evening’s featured Fillies and Mares Open Pace. Photo by Dean Gillette

Starting from post five, Rockin Nola was rocking out of the gate and went straight to the top as the heavy favorite in the evening’s featured event. She established fractions of :27.1, :55.1 and 1:23.0 before extending her lead on the front, rolling home in :28.2 for the 1:51.2 win. Bettor’s Up and LeWayne Miller finished two and one-quarter lengths back in second followed by Eyespywithmylileyen and John DeLong for third.

Owned by JP Racing LLC and Suttons Bay Racing, Rockin Nola is now 10 for 16 this season. Trained by Joe Putnam, she increased her career bankroll to more than $559,000 with the win.  Earlier this year, she lowered her career record to 1:49.4.

Also featured on the Saturday program was the $15,000 Open 2 Trot with I Know My Chip and Brandon Bates scoring a gate to wire win. The duo trotted home in :28.4 to win by two and one quarter lengths in 1:55.1. Bridge to Jesse’s, Indiana’s newest millionaire, finished second for John DeLong over My Uncle Cuz and Kyle Wilfong for third.

I Know My Chip was a mild upset, paying $9.40, $4.90, $3.40 across the board. The Ohio bred eight-year-old gelding is trained by Walter Haynes Jr. for owners Brian Carsey, Black and White Stables and Casey Myers, all of Indiana. The Deep Chip son recently went over the $1 million mark for his connections and has won 43 career races in 145 starts. His career best time of 1:52.1 was set as a six-year-old at Harrah’s Hoosier Park.