Rockin N Runnin was rallying on the far outside and timed the wire just right for trainer-driver Ross Leonard to upset a field of 10 in the $20,000 Bill Thompson final at Harrah’s Hoosier Park Saturday, June 15. The Rockin Image mare scored the win in 1:51.4 to equal her lifetime mark in the effort. 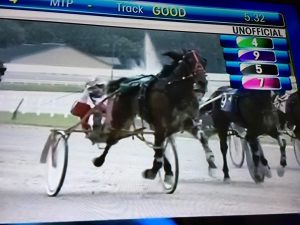 Rockin N Runnin and Ross Leonard rally hard on the outside to upset the field in the $20,000 Bill Thompson Final Saturday, June 15 at Harrah’s Hoosier Park.

Owned by Dandy Farms Racing, Greg Samples and Rachel Leonard, Rockin N Runnin was the second longest shot on the board after finishing fourth in the preliminary round to advance to the final of the Thompson Series. Leonard was unhurried with Rockin N Runnin in the early stages, following along as Pansy’s Image and John DeLong set the tempo. Around the turn, Rockin N Runnin moved up into position to be a challenger and accomplished that goal, using Harrah’s Hoosier Park’s long stretch to score the win by one and one-half lengths over Lady Capulet and Sam Widger. Titi’s Ava and Peter Wrenn finished third.

It was the fifth career win in 18 career starts for Rockin N Runnin, who just came back to the track after missing her entire four-year-old season. She was a recent purchase by her new connections and was bred by Merlin Van Otterloo of Rock Valley, Iowa.

Rockin N Runnin was part of a Pick 4 that went untouched during the Saturday program, sending a $1,584.42 carryover into the Tuesday, June 18 racing card. As a result, officials at Harrah’s Hoosier Park have announced a guaranteed $10,000 pool for the Pick 4 when it resumes in the third race of the night. The guaranteed pool is provided in partnership with Harrah’s Hoosier Park, the U.S. Trotting Association Strategic Wagering program, and the Indiana Standardbred Association.