Always Rockin kicked off the Thursday, June 23 racing program at Harrah’s Hoosier Park with a sub 1:50 effort. Guided by Michael Oosting, the four-year-old earned a new lifetime mark of 1:49.2 in the conditioned pace. 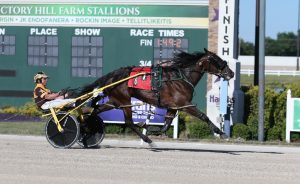 Always Rockin and Michael Oosting dipped under the 1:50 time barrier Thursday, June 23 with a new lifetime mark of 1:49.2 at Harrah’s Hoosier Park. Photo by Dean Gillette

Always Rockin scooted out from the gate and was on top by two and one-half lengths at the quarter in :26.2 with Restaurant Bully and Matt Krueger following along. Always Rockin got a breather during the second quarter before picking up the pace around the final turn.

Heading for home, Always Rockin had a four length advantage and turned in a final quarter of :26.4 to score the win by nearly three lengths. Odds On Hong Kong and Peter Wrenn blazed home in :25.4 to close for second over Restaurant Bully.

Always Rockin was the favorite of the field, paying $3.40 for the win. The Rockin Image gelding is owned by Triple Seven Stable and hails from the Ernie Gaskin barn. Ernie Graber bred the gelding, who earned his first win of 2022 in his third start and now has three career wins to his credit. He was unraced at two and won in 1:50.0 last year as a three-year-old. He is the oldest foal of Always Wearable, who took a mark of 1:52.1 during her career. She has a yearling colt this year by Always a Virgin named Virgins Retreat.

Always Rockin was a $12,000 purchase from the Hoosier Classic Yearling Sale. He becomes the 27th foal of Rockin Image to take a record under the 1:50 time barrier.

Foals by Rockin Image won the first three races on the card, including two-year-old Topville Somebeach, guided by Rick Plano. After sitting in the two-hole early, Topville Somebeach was flushed out around the final turn and got the jump on the field early in the stretch before fending off late closers at the wire for the win in 1:54.0, one and three-quarter lengths ahead of Hetolditlikeitwas and John DeLong. Cosmic Luck and Trace Tetrick finished third.

Topville Somebeach paid $6.80 for the win. He is owned by Maryann Plano, Rick and Geoff Howles and Souren Hovsepian. Merle Yoder bred the colt, who is trained by Plano. It was his second start, finishing third in his racing debut.

Topville Somebeach was one of 64 that sold at auction last fall by Rockin Image. He was the sixth highest priced yearling, selling for $40,000. He is the younger full brother to Topville Somrocket, who took a mark of 1:51.2 as a two-year-old last year and is currently racing.