Rockin Bambi is primed and ready for the Governor’s Cup Championships Thursday, Aug. 12. The two-year-old daughter of Rockin Image scored an impressive win in the final preliminary round of the Indiana Sired Fair Circuit (ISFC) Saturday at the Jay County Fairgrounds in Portland. 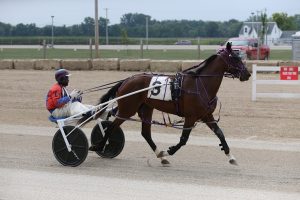 Trainer Terry Skinner warms up Rockin Bambi in preparation for her start in the two-year-old pacing filly division. She was a winner again, scoring her eighth win in nine starts for her young career. Photo by Dean Gillette

Starting from post three, Rockin Bambi rallied out for the lead at the start with Jordan Ross in the bike and never looked back. She established fractions of :30.3, 1:01.4 and 1:32.0 before opening up on the field and striding away to an eight-length advantage at the wire in 2:00.3, a final panel in :28.3. Stage Lightning and Jay Cross finished second over Hotshot Betsy and Clint Coy for third.

Owned by Ar’Tarrius Fleming of Mississippi, Rockin Bambi is trained by Terry Skinner. She now has eight wins in nine starts for 2021 with her quickest recorded at Hawthorne in early July in a time of 1:56.0.

Latest Kiss and Matt Rheinheimer were victorious in the other division of two-year-old pacing fillies, winning their heat in 2:04.0, pacing home in :28 seconds. Latest Kiss challenged from the outside around the final turn and was able to get a nose in front at the wire over Bankruptcy Bound and Matthew Avenatti. Rockstars Dynamite and Doug Rideout finished third.

The big winner of the day was driver Doug Rideout, who scored six wins on the 17 race card in front of his hometown crowd at Portland. Of that tally, five were from his barn, earning wins with Jesses Doll, Heres Devotion, Muscle Rocky, Rojo Man and Pure Cotton. Several of RIdeouts horses will be headed to the Governor’s Cup Championships next Thursday at the Indiana State Fair.