One of the toughest, most consistent racehorses to ever step onto Hoosier Park’s track is now representing Indiana in a different way. Rocket Fuel, owned by Twila Harts and trained by Alvin Miller his entire career, is now on display at the Indiana State Fair in the historic Taylor Barn. The exhibit has been available to Indiana State fairgoers since opening day Friday, Aug. 3. 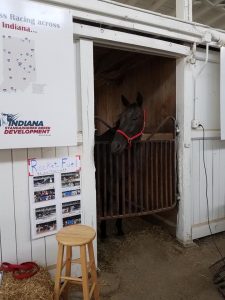 Rocket Fuel, the tough Indiana bred pacer, is now part of the exhibit in the historic Speed Barns during the final few days of the Indiana State Fair. (Photo by Indiana Standardbred Breed Development)

With the exception of one start at Balmoral Park in late 2008 where he won the Invitational, all other starts were recorded in Indiana at Hoosier Park and Indiana Downs. Rocket Fuel was unraced as a two-year-old.

Rocket Fuel’s last win was in the 2015 Grey Ghost Halloween Pacing Derby for grey pacers at Hoosier Park. He won the race by a neck in 1:54.1 with LeWayne Miller at the controls.

Rocket Fuel will be on display for a few days during the final week of the Indiana State Fair. Hours of operation are 10 a.m. until 7 p.m. daily. The Indiana Standardbred Breed Development department is conducting the tours and barn visits with the help of some volunteers from racing.