When Rocket Fuel retired in 2015, he did so on top. The 11-year-old son of Dontgetinmyway at the time, made his final start in October 2015 among the tough conditioned ranks at Harrah’s Hoosier Park. He won three of his last six career starts to bring his career earnings to $784,000 with a career best time taken at seven in 1:50.0. He earned 40 career wins for Twila Harts and trainer Alvin Miller when he retired. 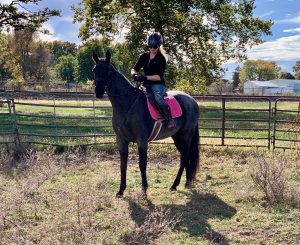 Rocket Fuel displays his under saddle skills for Lexi Sarkine at the Miami County Fairgrounds in Converse. Photo provided

Still in good shape, Harts decided to turn him out at the family farm to live out his life in Amboy, Ind., but the slower pace didn’t suit his personality. So, he was broke to ride and also makes the trek to the Indiana State Fair each year to be part of the Indiana Standardbred Breed Development display, meeting and greeting fair goers.

Now 16, Rocket Fuel, a multiple Indiana sired champion, was unraced at two but began on the track at three and raced nine consecutive years for the longtime partnership of Harts and Miller.

Harts is featured in a story in the upcoming May issue of the ISA Magazine penned by Ellen Taylor. The story explores Harts introduction into racing as well as the major stars of her stable, including Rocket Fuel and last year’s sophomore pacing champ Tellmeaboutit.