Rock Swan, the two-year-old Indiana trotting filly champ of 2019 and starter in this year’s Breeders Crown, was the sale topper of the Midwest Mixed Sale Tuesday, Nov. 24 at the Michiana Event Center. The Swan for All sophomore filly was the first of seven supplements, selling as Hip No. 119. Steve Cross, agent, represented the buyer for a price tag of $145,000. Lyndar Stable served as the agent for the filly, who has in excess of $586,000 in career earnings and a mark of 1:53.1. 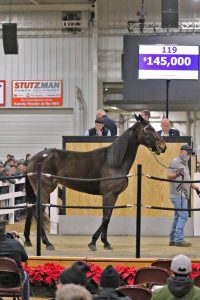 Rock Swan was the sale topper at $145,000 for the fourth annual Midwest Mixed Sale Tues. Nov. 24. Photo by Dean Gillette

The second highest priced seller was Always Giggling, consigned by Winterwood Farm as agent, listed as Hip No. 114. The Always a Virgin mare, who is now six, has a mark of 1:50.3 taken at four and earnings in excess of $484,000. She is the daughter of Giggles the Clown, who earned in excess of $657,000 during her career and took a mark of 1:50.3. Joseph Parisi of Allentown, NJ was the buyer.

Parisi also purchased the third highest seller of the day in the very next spot as Shady Caroline was acquired by Parisi for $62,000. The seven-year-old Shadyshark Hanover mare has a mark of 1:50.2 with earnings of nearly $400,000. She also comes from a famous family as her mother, Do Me Good, earned $435,000 and a mark of 1:52.4 during her career.

Lyle Slabach of Topeka, Ind. purchased the highest priced broodmare from the sale. At a tag of $43,000, Annie’s Delight, a five-year-old daughter of Bettor’s Delight, was last bred to Captain Crunch with the foal eligible in both Kentucky and Pennsylvania. Price Valley Boarding Farm of Kentucky consigned the mare.

Following the sale, an annual fundraiser was held offering food along with an auction. Proceeds will be earmarked to individuals in need associated with Standardbred racing.