In the April issue of “Hoof Beats,” the top freshman from 2019 on both the trot and the pace were featured in a “Sneak Peak” by Ken Weingartner. Several Indiana sired horses made the list, including Rock Swan, last year’s top freshman trotting filly in Indiana. 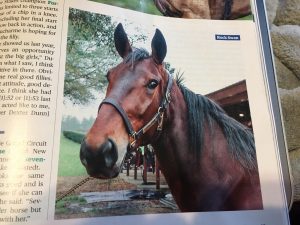 Rock Swan is ranked fifth on the list of Top 10 Sophomore Trotting Fillies in North America for 2020 in the recent issue of “Hoof Beats.” Photo by Michael Carter from Hoof Beats

Owned by S & R Racing Stables and Anthony Lombardi of Indiana and Illinois, respectively, Rock Swan was rock solid all season long. The Swan for All filly earned nearly $400,000 during her freshman season to be named the Indiana Sired Two-Year-Old Filly Trotting Champion as well as the Indiana Sires Stakes Divisional Champion.

Winning nine of 11 starts with two second place finishes thrown in, Rock Swan’s best time was recorded in 1:55.4. The filly out of the great Indiana race mare Jolly Jessica, who won 15 of 21 starts at three, is trained by Erv Miller and was driven by Trace Tetrick during the season. Rock Swan was purchased as a yearling from the Hoosier Classic Yearling Sale for $37,000.

In the poll of top 10 three-year-old fillies, Rock Swan is ranked fifth on the list. Another Indiana sired filly, May Baby, from the James Yoder Stable is also on the list in 10th place. The Guccio filly was a winner in six of her 10 starts with purse earnings of more than $225,000 and a mark of 1:53.2.