Rock Swan, the standout freshman trotting filly from 2019, has returned at three with just as much talent. The daughter of Swan for All won the second round of the Indiana Sires Stakes Wednesday, July 15 at Harrah’s Hoosier Park. 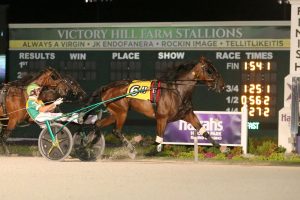 Starting from post six, Trace Tetrick was on a mission with Rock Swan to reach the front, obtaining the top spot just after the quarter in :27.2. The filly kept up the tempo and led the field into the stretch. J-S Miss Carly and Ricky Macomber Jr. sat right behind her the entire way and made a final move in the stretch, but Rock Swan was well in hand, winning by one and one-half lengths in 1:54.2. J-S Miss Carly finished second over Pretzel Party and Sam Widger, who maintained positioning for third.

It was the first win of the year for Rock Swan, who had two previous second place finishes in two starts. The time in the Indiana Sires Stakes was a new career best for the Erv Miller-trained sophomore. She is owned by S & R Racing Stables and Anthony Lombardi. Bobby Brower and Debra Garland bred the filly.

In the second division of the $32,000 Indiana Sires Stakes for three-year-old trotting fillies, May Baby was a commanding winner by nine and three-quarter lengths in a time of 1:53.4. The daughter of Guccio obtained the lead after the first quarter in :28.3 and kept on rolling, trotting home in :27.2 for the win. La Nancio and Jared Finn finished second over Hotel Whiskey and John DeLong for third.

Trained and driven by James Yoder, May Baby is owned by Cheyenne Yoder. She is now three for three in 2020 and took a career best time of 1:52.3 earlier this summer. Oakwood Farms bred the talented filly, who now has in excess of $275,000 in career earnings.

Indiana Sires Stakes is back in action Thursday, July 16 at Harrah’s Hoosier Park. The three-year-old colt and gelding trotters will be featured in one division going for $60,500 in the second leg. Emma Town Bud, who is three for three this season under the direction of trainer Byron Hooley has drawn post nine in the 10-horse lineup.