Rock it Out and Brandon Bates timed the wire just right to score a mild upset in the $17,500 Fillies and Mares Open 2 Pace Wednesday, Sept. 1 at Harrah’s Hoosier Park. The duo covered the mile distance in 1:51.0. 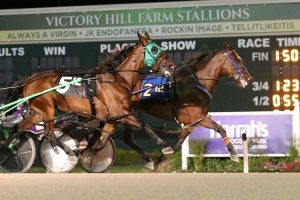 Rock it Out and Brandon Bates come up the inside to score the win in the top mares pace Wednesday, Sept. 1 at Harrah’s Hoosier Park. Photo by Dean Gillette

Starting from post two, Rock it Out used her inside post to her advantage and got away behind Moneymakehersmile and Trace Tetrick, the race favorites. Fractions of :26.3, :55.0 and 1:23.2 were set up as the field turned for home. Rock It Out kicked into gear and was able to move up through the inside to score the win by a neck over Moneymakehersmile. Image of a Dream and Rick Plano closed well in the lane to finish third.

Rock it Out paid $13.20 for the win. The four-year-old Rockin Image mare is owned by D and R Racing Stable and trained by Donna Holt. Cornerstone Stock Farm bred the Indiana sired mare, who is a half sister to three-year-old standout Saddle Up, who took a mark of 1:50.3 in a qualifier earlier this season.

Rock it Out also scored a new lifetime best in the event. She is now four for 12 in 2021 and pushed her career earnings over $115,000 for her connections.

Also on the card were two divisions of Indiana Sires Stakes for three-year-old trotting fillies. Scoring wins in the event were Treasure Gems K and Sam Widger in a time of 1:54.4 and Ima Diamond Babe and James Yoder in a time of 1:55.0. Treasure Gems K, a daughter of Encore Encore, is trained by Norm Parker for the ownership of Norm Parker Stable and Thomas Klosky Jr. Yoder also trains Ima Diamond Babe and co-owns the Guccio filly with his wife Cheyenne.