Four Indiana sired horses were winners at Harrah’s Hoosier Park’s sister track Scioto Downs Tuesday, May 24 with River Rock and Brett Miller kicking off the afternoon with a win in the first race. The duo trotted to a mile in 1:56.4. 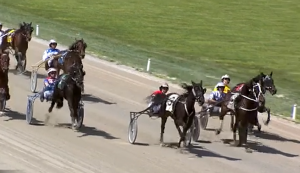 River Rock, second from right, fends off challengers on both sides en route to a new lifetime mark at Scioto Downs Tuesday, May 24.

Starting from post eight, River Rock shot out like a bullet to the lead, eventually clearing the top halfway through the first turn of the race. Heavily favored Martysmagicmoment and Kayne Kauffman were sitting right at her back through the quarter in :28.0. Heading by the soon to be new grandstand for the first time, the best scenario for River Rock unfolded as Martysmagicmoment moved out and around to take over at the half in :57.4 and three-quarters in 1:27.2. River Rock waited patiently as the field began to close in on the front ones.

River Rock was a surprise winner, paying $21.20 for the win. The four-year-old daughter of Whom Shall I Fear is owned by Allan Schmucker Jr. and trained by Brittany Baker. Mast Standardbreds bred the mare, who is part of the second crop of Whom Shall I Fear. River Rock was a $12,000 purchase from the Hoosier Classic Yearling Sale. The win was the first of the year in three starts for River Rock. She now has four wins in 15 career starts. The lightly raced trotter earned a new lifetime mark in the race as well and bumped her career earnings over the $23,000 mark.

Another Indiana winner on the card was Rosa’s Rebel, driven by Trevor Smith. The four-year-old Always a Virgin gelding came roaring from the back of the pack in the stretch to win by two and one-half lengths in 1:54.0. Autotune Hanover and Jeremy Smith finished second over Siskel and Shawn Barker II for third.

Rosa’s Rebel is owned and trained by Jason Brewer. He paid $8.40 for the win. The Justin Yoder bred gelding earned his eighth career win and now has $61,000 in career earnings. His career best time was taken last year at Dayton in 1:53.2.