Rigginswind, multiple winner on the Indiana Sired Fair Circuit last season, earned a win on the Tuesday, July 28 racing program at the Fayette County Fairgrounds in Connersville. Driven by Matt Rheinheimer, the three-year-old daughter of Riggins earned the win in 2:00.2. 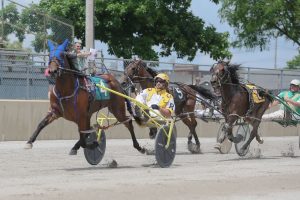 The entire card at the Fayette County Fairgrounds was dedicated to three-year-olds Tuesday with sophomore pacing fillies kicking off the card with three divisions. Baby Lets Roll and Joey Putnam picked up the victory in the first race in a time of 1:59.3, and Rigginswind followed suit in the second race.

Starting from post three, Rigginswind and Rheinheimer had to work to get to the lead as Robins On Time and Joey Putnam scored the top spot at the quarter in :30.1 before Rigginswind was able to obtain the top spot by the half in :59.4. The filly kept the tempo lively and, in the stretch, pulled away to a two and one-half length win in 2:00.2. Robins On Time finished second over Rockin Rachel and Don Eash for third.

Owned by Devon Miller, Rigginswind earned her second win in six starts this year. It was her second start on the Indiana Sired Fair Circuit this year and her first win on the ISFC. She was competing at Harrah’s Hoosier Park for Sumpter before ISFC action got started. Last year, she won seven races in 18 starts. Earlier this year, she earned a career best time of 1:54.0 and now has nine career wins. Marlin Miller bred the filly.

The third and final division of the three-year-old pacing fillies was won by Elite Five and Jay Cross. Starting from post two, Elite Five went straight to the lead and never looked back, winning by three and three-quarter lengths in a time of 1:59.2. Ain’t No Secret and Clifton Bell finished second followed by Ivanna Ivy and Rocky Loney for third.

Elite Five, trained by Brett Wilfong, is owned by Lynn, Barbara, and Candice Wilfong. The Always A Virgin filly is now three for six in 2020 and took a career best time of 1:56.3 at Converse earlier this month.

The ISFC returns to action Monday, Aug. 3 and Tuesday, Aug. 4 at the Shelby County Fairgrounds. Horses are earning points from each of the ISFC sites based on performance and are working toward a spot in the Governor’s Cup Championships set for the Indiana State Fairgrounds September 10.