Driver Terry Skinner had a successful day Monday, July 26 during the second round of racing at the Elkhart County Fair in Goshen, Ind. Skinner started his day off with a win in the first division of the Indiana Sired Fair Circuit two-year-old colt and gelding pace. 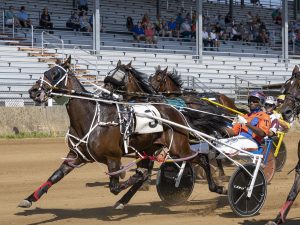 Joseph Weiser of The Goshen News took many awesome shots of racing at The Elkhart County Fair, including this photo of Terry Skinner and Riggins Revenge. Photo by Joseph Weiser

Riggins Revenge was ready to roll when the gate folded, taking Skinner right to the lead. He had a strong hold on the front as fractions of :29.4, 1:00.4 and 1:30.3 were posted on the board. Riggins Revenge began to draw away from the field heading around the final turn and scored the win by eight and three-quarter lengths at the finish in 2:01.4. Vel Bitter Chip and Kevin Lambright finished second followed by Vel Mark and Clay Craib for third.

Riggins Revenge is owned by Kendrick Stewart and trained by Skinner. The Riggins freshman gelding was bred by Jason Graber. The win marked his third of the season in seven starts. He has only been back of third once all season. His best time was recorded at Converse in mid-June in 1:58.3. Riggins Revenge was a $3,500 yearling purchase from the Michiana Classic Yearling Sale last fall. He was only one of six foals by Riggins offered at auction last fall.

Other winners on the program for Skinner included Bankruptcy Bound, trained by Gregory Farina. The Always A Virgin filly led gate to wire through fractions of :31.0, 1:03.3 and 1:35.0 before pacing home in :29.4 for the win in 2:04.4. Rockin Q and Tyler Miller finished two and one-quarter lengths back in second followed by Hotshot Betsy and Jay Cross in third.

Bankruptcy Bound is owned by Robert and Richard Farina of Illinois. The homebred filly was bred by trainer Gregory Farina. She has now won half of her six starts this season in Indiana.

Skinner also recorded another win from his stable as Rockin Bambi was a winner in the two-year-old filly pace. The Rockin Image filly posted fractions of :29.0, 1:00.0 and 1:29.4 before drawing off for a nine-length win in 1:59.4. Bluebird Venus and Tyler Miller finished second over Vel What A Journey and Kevin Lambright for third.

Rockin Bambi is owned by Ar’Tarrius Fleming of Mississippi and was bred by Broekhuis Stables and Ernie Hochstetler. She is now six for seven this season with her career best mark taken at Hawthorne in early July in a time of 1:56.0.