Doug and Julie Rideout were the subjects of a feature in the Winchester News Gazette Thursday, April 25. The Rideouts, who have lived in Randolph County near Winchester since 2002, have their own farm complete with a training track that has produced numerous Indiana champions over the past 15 years. 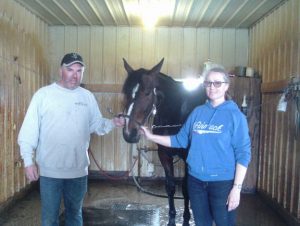 Doug is a native of Canada and represents his home country with maple leaves on his brown and gold colors. According to the story in the Winchester News Gazette, he is now in his 33rd year of racing. He is sitting on 2,699 career driving wins with more than $9.8 million in career earnings.

Julie works right alongside Doug in the barn and is an integral part to the stable’s success. A native of Jackson, Michigan, she is also an avid rider and participates with a loyal group that participates in horse shows each summer featuring Standardbreds and also rides in numerous trail rides on retired Standardbreds.

Doug is a director with the Indiana Standardbred Association and Julie also volunteers numerous hours for the betterment of the sport in the Hoosier State. They have had a long, successful partnership with owner-breeder Dr. Alan White and his wife, Carol, of Fountain City. They have teamed up for numerous wins with standouts such as Just Jess.