The two-year-olds showed up in a big way for the Rideout Stable Sunday, July 5. Three freshman trotting colts were winners along with one freshman trotting filly to give Trainer-Driver Doug Rideout four wins on the card during the second day of action for the Indiana Sired Fair Circuit (ISFC) at the Converse Fairgrounds. 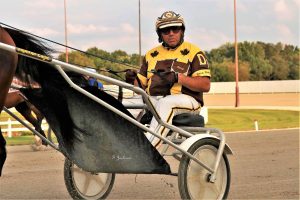 Rideout’s day began in the first race with Wild Jailhouse, a son of Jailhouse Jesse. Rideout had the inside post with the gelding and got him out on the lead and never looked back, scoring the win by 14 and one-half lengths in 2:05.4, a final quarter in :30.1.  Amigo Style and Charlie Conrad finished second over Tophat and Robert Taylor for third. Wild Jailhouse is owned by Pete Schmucker Jr. and Julie Rideout and is a homebred by his connections.

In the second division another Jailhouse Jesse gelding was victorious as Jessies Outlawed picked up the win in 2:07.3. J-S Swan Returns and Alex Udell got the early call and Jessies Outlawed got right on his back. After he made a break, the lead was inherited by Jessies Outlawed for the rest of the mile. He was a winner by one length at the finish line over R Luvajessie and Jay Cross. High Idol finished third for Driver Wyatt Avenatti.

Jessies Outlawed is owned by Julie Rideout and Glider Stables. Harvey and Alvin Fry are the breeders on the two-year-old.

Rideout’s winning ways continued in the third division as Brookview Bluto was a winner in 2:09.0. Seven Points Flyer and Logan Loney had the early call before Brookview Bluto and Rideout moved to the lead. At that point, they kept the field at their heels, winning by three lengths at the finish line. SJ’s Star’s Man and Mike Peterson finished second over Woodside Emery and Joey Putnam for third.

Heres Devotion was the final winner of the day for Rideout in the second division of two-year-old trotting fillies. Starting from post four, the Here Comes Herbie filly got the early lead and was never challenged, pulling away to a 16 and one-half length victory in 2:09.0. Miller Lite and Jay Cross finished second over Swantastic and Joey Putnam for third.

Speed was the theme later in the card for three-year-old pacers. Driver Joey Putnam picked up back to back wins in the sophomore filly pace, guiding Baby Lets Roll to victory in 1:57.3 followed by a win with Elite Five in 1:56.3. Trained by Joe Putnam, Baby Lets Roll paced home in :28.3 as a one and three-quarter length winner over Dojea Gigi and Mike Peterson. Yo Lets Bounce and Matt Rheinheimer finished third.

Elite Five earned a wire to wire win by six and three-quarter lengths in a time of 1:56.3, a final panel in :28.0. Lillian Rose and Rideout finished second over Sgtshirleyssweetie and Jeff Dever for third.

Elite Five is trained by Brett Wilfong and owned by Lynn, Barbara, Brett and Candice Wilfong. The Always a Virgin filly was bred by Homestead Acres.

The ISFC moves to Portland Wednesday, July 8 for the next round of action at the Jay County Fairgrounds.