It was a big day for the Rideout and Myers Stables at the Indiana State Fairgrounds Thursday, Aug. 13. Both operations scored four wins on the afternoon racing program featuring all ISA Elite Series races. All eight wins were in the trotting ranks. 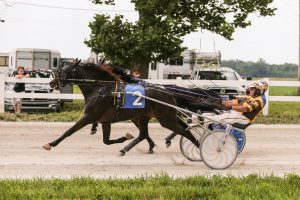 Quality in Motion, shown earlier this summer with Doug Rideout at Converse, was one of four winners on the Elite program at the Indiana State Fairgrounds Thursday, Aug. 13. Photo by Dean Gillette

Rideout and Myers split trips to the winner’s circle in the two-year-old filly trot and the two-year-old colt and gelding trot. Miss Greenbacks rallied home in a gate to wire effort in the first division, winning by two and one-quarter lengths in 2:01.2, a final panel in :28.4 with Rideout at the controls. Spell Cuteypie and Lester Raber finished second while J-S Miss Ashley and Alex Udell finished third. Matthew Miller owns the daughter of Big Stick Lindy, who was bred by Dennis Bontrager. It was the fourth win of the year in seven starts for the freshman, who earned a career best time of 2:00.1 in late June at Harrah’s Hoosier Park.

In the other division of two-year-old trotting fillies, it was Myers’ turn to score the victory as J-S Siesta Tan and Udell trotted gate to wire for the win in 2:02.4, a final panel in :29.2. Indiancreek Blu and Rideout finished a length and a quarter back in second followed by J-S Miss Emma and Mike Peterson for third.

Owned by Myers Racing Stable and trained by Jack Myers, J-S Siesta Tan, a daughter of Guccio, is now five for six this year. Her win at the Indiana State Fairgrounds was a new career best.

Rideout was in the winner’s circle in the first round of the $6,875 ISA Elite for freshman trotting colts and geldings. Jessies Outlawed got away on the lead to set the first fraction in :31.2 before J-S Hopscotch and Udell powered to the lead, setting middle fractions of 1:03.0 and 1:32.1. In the stretch Jessies Outlawed moved back out for the challenge and was leading at the finish in 2:02.2. Major Hooligan and Don Eash moved into second in a photo finish with J-S hopscotch who finished third.

Jessies Outlawed is owned by Julie Rideout and Glider Stables. The son of Jailhouse Jesse was bred by Harvey an Alvin Fry and is now five for eight this year. His win in the Elite Series marked a career best.

Udell was back in the winner’s circle for the second division of two-year-old trotting colts and geldings. J-S Swan Returns got away well in third as Lexie’s Boy and Robert Taylor set the first fraction in :30.3 before going off stride. Mean Tweet and Rideout took over the front with J-S Swan Returns sitting right at his back the rest of the way. In the stretch, the two freshman trotters went head to head with J-S Swan Returns getting the advantage by a half-length at the finish line in 2:02.0, a final quarter trotted in :28.4. Mean Tweet finished second over ER Nelson and Don Eash for third.

Owned by Jack Myers Racing Stable, J-S Swan Returns recorded a new career best time in the win and is now three for six this year.

Shifting gears to the three-year-old trotting ranks, Rideout swept the sophomore filly divisions with Classic Money and Quality in Motion. Classic Money sat patiently in the two-hole behind Bubbles N Suds and Andy Shetler before trotting home in :29.4 for the one and three-quarter length win in 1:58.3. Ladys Dreamaker and Clint Coy moved up to second over Bubbles n Suds, who had a breaking violation at the finish line.

Matthew Miller also owns Classic Money. The Guccio filly, who is a half sister to Miss Greenbacks, earned her second win of the year and also placed a new career mark on her credentials.

Quality in Motion was the next Rideout trainee to score a win. The Jailhouse Jesse sophomore trotting filly sat behind J-S Miss Ruby and Udell before moving out late in the stretch to win by a length over Fear the Yankee and Jay Cross. J-S Miss Ruby finished third.

Owned by Julie Rideout, Dr. Alan White and Dave Gamble, Quality in Motion scored her third win of the year. Her time of 1:59.2 in her mile at the Indiana State Fairgrounds was a new career best.

The focus moved to the three-year-old colt and gelding trotting ranks to close out the 17-race card. The Myers Stable won both divisions with J-S Jasper and J-S Ivan the Great.

J-S Jasper and Udell got an early lead past the quarter in :31.0 but were overtaken before the half by Onemoreswan and Don Eash. Udell got the Big Stick Lindy gelding in gear for the stretch drive, trotting home in :27.4 for the four and one-half length win in 1:57.3. Onemoreswan finished second while Classy Prince and Joey Putnam moved up to third.

J-S Jasper, bred by Ben Wittmer Jr., earned his fourth win in his eighth start of 2020. He was a multiple winner as a two-year-old with nine wins. He now has 13 career wins in 22 career starts for Jack Myers Racing Stable.

The final division of the day as awarded to J-S Ivan the Great and Udell. Fear the Tiger and Clint Coy set fractions of :28.4, :58.2 and 1:27.2 before J-S Ivan the Great had the opportunity to move in for the challenge. In the stretch, the Swan for All gelding trotted home the quickest of all in :28.3 to earn the win in 1:56.2. Jekyil N Hyde and Jay Cross finished second over Fear the Tiger for third.

J-S Ivan the Great earned his fifth win of the year in 10 outings with the mile establishing a new lifetime mark on his card. He increased his career bankroll to more than $35,000 with the win.