The Indiana Horse Racing Commission (IHRC) held its regular meeting Dec. 3, 2019 at the Indiana State Library in downtown Indianapolis. Several items were on the agenda, including the hearing on the 2020 renewal of the Indiana Standardbred Association (ISA) as a registered horsemen’s association. 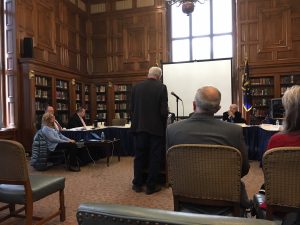 Joe Putnam, ISA President, spoke on behalf of the organization to update the IHRC about progress and plans set for 2020. Included in his notes was the return of the rich Breeders Crown to Harrah’s Hoosier Park in 2020.

“The 2019 Standardbred meet was successful,” said Putnam. “With 12 track records set, it shows how the Standardbred horses are growing and continuing to get better and better. And, in 2020, Hoosier Park will welcome back the Breeders Crown.”

Putnam also pointed out the many assets for the 1,100-plus ISA members, from a health clinic to chiropractic services on the backstretch at Hoosier Park. He also noted the organization’s college assistance program, the horsemen’s benevolent program and the continued support of racehorse aftercare programs.

In addition, Putnam also noted that the process to have a new economic impact study on the horse racing industry in the state of Indiana is being planned. The last study was in cooperation with Purdue University and covered 1994 – 2011.

“We feel a lot has changed since 2011, and we want to get an updated look at the economic impact,” added Putnam.

In additional items on the IHRC agenda, the approval of Caesar’s 2020 Operational Plan for Harrah’s Hoosier Park was conditionally approved, awaiting a couple of additional documents regarding details of the plan. Rick Moore, vice president and general manager, along with Emily Gaskin, race marketing manager, gave a presentation regarding plans for 2020, which will include the implementation of the Breeders Crown. Full approval of the operational plan is expected later in December.