In the early days of pari-mutuel racing at Hoosier Park, there were a few horses that stood out. Although she wasn’t Indiana sired, Eternal Camnation called Indiana’s oval home and started her career off in the Hoosier State before venturing onto international stardom. 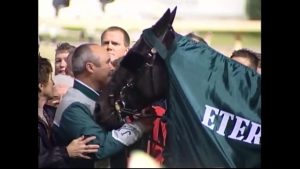 Trainer Jeff Miller holds the great Eternal Camnation following one of her major wins of her career. She began her campaign in Indiana as a two-year-old. Photo by Canadian Hall of Fame

Trained by Jeff Miller, Eternal Camnation picked up earnings in excess of $3.7 million from five years of racing with 47 wins in 101 starts. The Cam Fella mare, owned by Dorothy Miller and Jeff Miller Stable retired as the leading money winning pacing mare of all time and is a member of the Hall of Fame in both the United States and Canada. She retired to brood mare status in 2004 at the Miller farm in northern Ohio and her son, Rocken Camnation, the only gelding among six foals between 2006 and 2011 from the great mare, is still racing.

At the age of 12, Rocken Camnation scored his latest victory at Northfield Park Sunday, Jan. 10 in conditioned pace action with a gate to wire victory for driver Aaron Merriman. Owned by River Roubaix and Mark Headworth and trained by Headworth, the Rocknroll Hanover gelding now has in excess of $427,000 in earnings with a career best time of 1:50.0 taken at the age of six. His most recent win was recorded in 1:55.4, representing his famous mother well on the track.

Eternal Camnation was a Breeders Crown winner at the age of two which prompted her to be named Two-Year-Old Pacing Filly of the Year in both the United States and Canada. In all, she was named Pacing Mare of the Year in both the U.S. and Canada three times. Other accolades included four consecutive Canadian Older Pacing Mare of the Year before her retirement. Woodbine Mohawk continues to hold the Eternal Camnation Stakes each year in her honor.

Although Miller was not stabled at Hoosier Park, he utilized the track for all qualifying and prepping for Eternal Camnation throughout the early stages of her career. Fans were treated annually to a performance by the speedy pacing filly, which was a big boost to the local racing scene in the early 2000s.