Red Rose Swan turned in a game effort Tuesday, April 2 to win the $27,500 Dr. Dan Farwick Memorial Late Closer Championship at Miami Valley Raceway. Trained and driven by LeWayne Miller, the four-year-old daughter of Swan for All fended off Broadway Mojo and Chris Page for the win by the margin of a head in 1:55.0, a new lifetime mark. 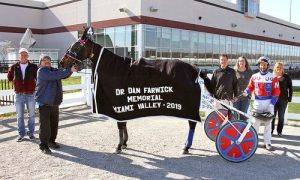 Red Rose Swan and LeWayne Miller swept the preliminary and the championship round of the Dr. Dan Farwick Memorial Tuesday, April 2 at Miami Valley Raceway. (Photo by Conrad Photography)

Red Rose Swan rallied out of the gate from the center of the track, reaching the top spot by the quarter mile marker in :27.3 and kept on trotting, turning in a near gate to wire effort. The Indiana bred mare was the favorite of the field after winning the preliminary round. In five starts for 2019, she now has two wins and three seconds with purse earnings in excess of $33,000 for owners Brian and Jeremy Eash of Shipshewana, Ind.

Red Rose Swan was a $7,000 yearling purchase by Miller. Prior to being purchased by the Eashs, she had six wins and nearly $170,000 in purse earnings. She was sold at the Michiana Mixed Sale in Shipshewana last fall where she brought a price tag of $70,000. She has now almost earned back half her purchase price for her new connections.

Bred by Alvin Schwartz and Mystical Marker Farms, Red Rose Swan is the eighth foal from the Pine Chip mare Red Rose Kosmos. All eight of her foals have earned marks under the 2:00 time barrier. Red Rose Swan has a yearling brother by Googoo Gaagaa, who stands in Pennsylvania.