Buyers were out in full force during the first day of the Hoosier Classic Yearling Sale at the Indiana State Fairgrounds Friday, Oct. 23, and records were set. Four yearlings fetched prices of $100,000 or more through Hip No. 190, including a new record for an Indiana sired yearling in history with pacing colt JK’s Speed being knocked down at $240,000. 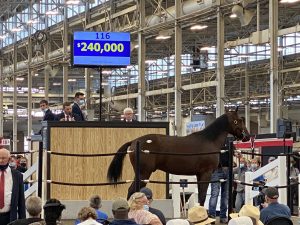 A new record for an Indiana sired yearling was recorded during the first day of the Hoosier Classic Yearling Sale as JK’s Speed was knocked down at $240,000. Photo by Indiana Standardbred Breed Development

Hailing from the Victory Hill Farm consignment, JK’s Speed is a son of JK Endofanera and from the already proven broodmare Safta Perry, a daughter of Always a Virgin. The pure Indiana sired product is a half-brother to Rockin Speed, who has a mark of 1:49.1 and earnings in excess of $250,000. The good-looking individual caught the attention of several buyers and in the end, Nancy Takter, agent for 3 Bros. Stable of Allentown, NJ, went home with the colt.

The second highest yearling on the first day was just a few hip numbers before JK’s Speed as Royal JK was purchased for $115,000 by the same connections. Also by JK Endofanera, the colt was expected to be a hot commodity in the sales ring as he is a half-brother to Little Rocket Man, standout pacer from the Missy Essig Stable this season. Little Rocket Man took a mark of 1:47.1 earlier this year at Harrah’s Hoosier Park to equal the overall track record and his bankroll continues to grow over $300,000. The dam, GT Miss Royal, is a star in her own right with $230,000 and a mark of 1:52.3 with Indiana Sires Stakes wins to her credit. The Pilgrims Punch mare also represents a pure Indiana sired pedigree and has a three-year-old this season, also by Rockin Image, named Royal Rocks that was timed in 1:54.2. Royal JK was also from the Victory Hill Farm consignment.

Happy Space, Hip No. 150, was the third highest priced yearling of the day from the Wilt Standardbred consignment. Based out of Savannah, Mo., the consignment included the Swan for All filly, who is a first foal from the Muscles Yankee mare Happy Place. Under the second dam, a lot of black type is detected, including Somebody to Love, a mare by Angus Hall with a mark of 1:56.0 and earnings of more than $600,000. John and Pete Schmucker and David Rickey’s S & R Racing Stable of Fishers, Ind. was the winning bidder of the filly with a price tag of $112,000.

The final six-figure yearling was another trotter, Swan Captain, selling as Hip No. 184. The Swan for All colt from the Oakwood Farms consignment of Montgomery, Ind. was purchased by William DeLong of Clinton, Wis. for $100,000. The colt is the latest foal from the proven Muscles Yankee mare Yoga, who took a mark of 1:54.4 during her career and was a winner all across the Eastern portion of the United States, many of which was in the Grand Circuit. Yoga is the dam of Shishito, a daughter of Father Patrick who won a division of the Circle City in her last start the night before the sale at Harrah’s Hoosier Park. Yoga is also the dam of Warrior One, also by Father Patrick, who has a mark of 1:52.4 and earnings nearing the $200,000 mark.

The sale was a precursor to the Breeders Crown eliminations at Harrah’s Hoosier Park Friday night. Several Indiana sired horses competed in the eliminations and several will advance to the finals slated for Friday, Oct. 30 and Saturday, Oct. 31 for the prestigious $6 million championships.