The penultimate week of racing is underway at Harrah’s Hoosier Park for the 2022 racing season and several pacers were in the spotlight Friday, Dec. 2. The only trot of the 14-race card was won by Reckless Reviver, who was in for a tag of $9,000 for the first time in his career. The freshman trotter lived up to his race favorite billing, scoring the win by open lengths in the Harrah’s Gulf Coast conditioned claiming trot. 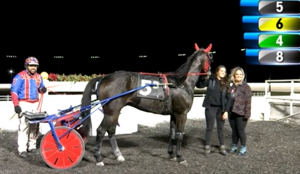 Reckless Reviver and Robert Taylor scored an easy win in the only trot on the Friday, Dec. 2 card at Harrah’s Hoosier Park.

The red hood of Reckless Reviver, with Robert Tayler in the bike, was very noticeable leaving the gate. He trotted out with authority and secured the spot right behind Bangles N Beads and Kyle Wilfong. The spot would lead him to the stretch as he followed along through fractions of :29.4, 1:00.2 and 1:31.2.

In the stretch, two horses went off stride, including Bangles N Beads, leaving the stretch open for Reckless Reviver to advance to the lead. Taylor never took his hands out of the handholds as the gelding trotted home to a six and three-quarter length advantage in 2:01.3. Crecia and Jacob Fox finished second over Graceful Lilly and Sam Widger for third.

Reckless Reviver paid the minimum to his backers with a win price of $2.40. The Swan In a Million gelding is owned by Burt Paddock and Kyle Hupfer. Taylor also trains the gelding who was bred by Ever Green Acres.

It was the fourth win of the season for Reckless Reviver, who has 15 starts in 2022. He now has more than $25,000 in earnings. His career best was taken earlier this year in 1:58.1 at Harrah’s Hoosier Park. He was one of 38 yearlings from the first crop of Swan in a Million that sold at public auction. He was purchased for $9,000 at the Hoosier Classic Yearling Sale as the first foal from the Muscles Yankee mare Muscle Up Hazel, who took a mark of 1:57.2 and made more than $15,000 during her brief career.

Another winner on the night was Brooklets Banner, a six-year-old gelding bred by Gary Wilcox at his farm in Urbana, Ind. with his stallion Personal Power, who has been around for nearly two decades in Indiana. Brooklets Banner used no speed early and went to the back of the pack as Threeofthebest A and Trace Tetrick led the way through fractions of :28.1, :56.3 and 1:25.2. Travis Seekman got Brooklets Banner in gear at that point and the duo went to work.

Brooklets Banner paced home in :29.2 and passed up every horse in the race for the win by one length in the $15,000 claiming event. Major Bucks and Sam Widger finished second over Carlos Mittanna and John DeLong.

Brooklets Banner paid $13.20 for the win. He is now owned by Matthew Riggle and trained by Matt Rodriguez. It was his sixth win of the season for Brooklets Banner. It was his second win in a row for his connections, who claimed him for $3,000 in mid July. His career best time of 1:48.2 was taken earlier this year at Harrah’s Hoosier Park and he now has 11 wins in 66 starts with earnings of more than $94,000.