Real Desire has a long history in the state of Indiana. Before he was a sire, he was a stakes winner at Harrah’s Hoosier Park. Since that time, his foals continue to be competitive, profitable racehorses both in the state as well as outside the boundaries of the Hoosier State. 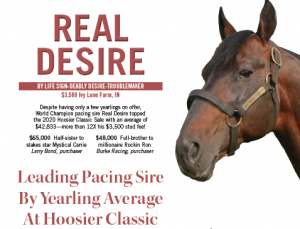 Real Desire was the top pacing sire by average at the recent 2020 Hoosier Classic Yearling Sale. He stands for $3,500 in 2021 at Ivy Lane Farm. Photo provided

Inducted into the Harness Racing’s Living Hall of Fame in 2016, Real Desire is a son of Life Sign who earned in excess of $3 million during his career. He recorded nine sub 1:50 victories and was Horse of the Year in both the United States and Canada. His best time was taken at four in 1:48.2 before he retired to stud duty.

Real Desire’s first experience in Indiana was as a three-year-old when he won the Hoosier Cup, at the time, the richest Standardbred race in the state of Indiana. The two-time Breeders Crown champion retired after his four-year-old year.

As a stallion, Real Desire’s foals have earnings in excess of $73 million. He’s produced 312 in 1:55 or faster and has 163 $100,000-plus winners, including four millionaires. He’s also showing success as a broodmare sire with the standout pacing filly Priceless, out of a Real Desire mare. His most recent standout in Indiana was Sawyer’s Desire, winner of the Circle City Pace this fall at Harrah’s Hoosier Park.

Real Desire remains as Indiana’s number one sire in all-time earnings. He led all pacing sires at the 2020 Hoosier Classic Yearling Sale with an average of more than $42,000, his highest seller going for $65,000.

Managed by Brittany Farms, Real Desire stands at Ivy Lane Farm for a fee of $3,500 in 2021. Look for his ad in the upcoming December issue of the ISA Magazine, due out in homes in a few weeks. For more information visit Brittany Farms at www.britfarms.com.