Rod Ratcliff, longtime owner of Hoosier Park through his company Centaur Gaming, was one of two individuals inducted into the Indiana Horse Racing Association Hall of Fame during a special ceremony Monday, Nov. 4. The sixth annual event was held at Indiana Grand. 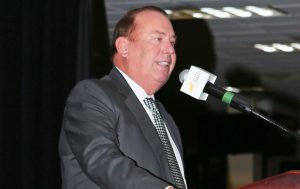 Rod Ratcliff has been a champion for Standardbred racing for decades in Indiana. He was recently inducted into the IHRA Hall of Fame for his support and work in the industry. Photo by Coady Photography

Ratcliff was honored following a presentation by Jim Purucker, president of John Frick & Associates followed by the reading of the resolution by John Keeler, vice president and general counsel for Spectacle Entertainment. A portrait of Ratcliff was unveiled and will join previous inductees into the IHRA Hall of Fame on display at Indiana Grand.

During his acceptance speech, Ratcliff noted, “I spent many nights with Steve Panke and Ralph Wilfong in Ralph’s office at the farm learning about horses. They were the real pyramids of horse racing. Being on that wall with them is a true honor. They, along with Stormy Bidwell helped me at every turn to get me where I am today. It’s been a heck of a ride and it’s always been enjoyable. We will always have your back and we are looking out for you. This is an industry that I will never turn my back on.”

Ratcliff joined Jim Elliott, longtime Thoroughbred owner and breeder, as the latest inductee into the IHRA Hall of Fame. The event was hosted by Emily Gaskin and Rachel McLaughlin.

The seventh annual IHRA Hall of Fame will be held at Harrah’s Hoosier Park in 2020 and will be part of the prestigious Breeders Crown Championships returning to Indiana next fall.