After more than two decades, Harrah’s Hoosier Park reimplemented Sunday racing May 23. Ramblin Art and Brandon Bates won the first race on the card to set the tone for the night. 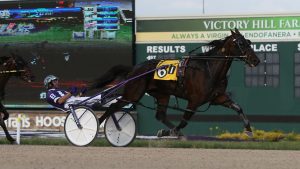 Ramblin Art and Brandon Bates won the first race on the first Sunday night of racing at Harrah’s Hoosier Park in over two decades. Photo by Dean Gillette

Starting from post five, Ramblin Art rushed out to the early lead to set the first fraction of :27.0. Prescotts Hope and Rick Plano quickly moved to the lead at the half in :56.2, leaving Willey Bite and Trace Tetrick on the outside at the three-quarters in 1:25.1.

The $8,000 claimers were led into the stretch by Ramblin Art, who took over and rallied home in :28.1 for the win by one and one-half lengths over Willey Bite. Danza and Sam Widger finished third in the 1:53.4 mile.

Trained by Henry Graber Jr., Ramblin Art paid $6.00 for the win. The nine-year-old son of Kilowatt is owned by Eleven Star Stables and Hillside Stables. Herman Whittington of Ohio bred the veteran pacer.

Ramblin Art didn’t start his racing career until he was three. He then returned at five and raced primarily at Plainridge for three years before returning to Indiana last year. Ramblin Art now has 23 career wins in 125 starts with earnings over the $171,000 mark. His career best time of 1:51.1 was taken last summer at Harrah’s Hoosier Park. The win on Sunday was his second of 2021.

Trained by Jeff Cullipher, Brassy Hanover is owned by Cullipher and Pollack Racing LLC. He was bred by Hanover Shoe Farms. The Well Said five-year-old earned his first win of 2021 in the race, which put him over the $400,000 in career earnings. His career best time was taken last year at Harrah’s Hoosier Park in 1:48.1.