Raes Lucky Charm, an Indiana sired son from the first crop of Luck Be Withyou, scored a win in the first race of the season at Hawthorne Friday, Jan. 7. Driven by Brandon Bates, the sophomore gelding scored the win in a comfortable 2:02.4. 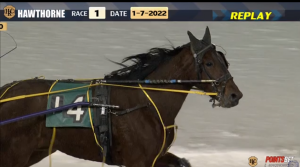 Raes Lucky Charm scored a win in the season opener at Hawthorne Friday, Jan. 7, 2022 with Brandon Bates in the bike.

The field was reduced to four participants, but all four stayed within contention of one another the entire mile. Hearemtalkin and Wyatt Avenatti had the first lead at the quarter in :32.3 followed by Royale Ryan and Austin Hanners, who led to the stretch through fractions of 1:04.2 and 1:35.1. Raes Lucky Charm sat patiently in last until Bates pulled her to challenge heading into the final turn.

In the stretch, Raes Lucky Charm took over and was on top of the field by open lengths, just coasting. Diamond Diesel and Juan Franco were the widest and made a mild bid toward the leaders, but Raes Lucky Charm was strong through the wire in the conditioned claiming event with a purse of $4,700. Diamond Diesel finished one and three-quarter lengths back in second followed by Royale Ryan. Raes Lucky Charm, the favorite of the field, paced home in :27.1 through very cold temperatures, paying $3.40 for the win. Bates had a ton of horse in the tank following the win and had to utilize the entire backstretch to pull the gelding up to return to the winner’s circle.

Raes Lucky Charm is owned by Kyle Larner of Michigan and trained by Tim Roach. Alvin, Dessa and Zach Miller bred the gelding from the family’s standout pacing mare Pacific Sun Rae, who earned a mark of 1:51.4 and earnings in excess of $320,000. Larner purchased the filly following the Harrah’s Hoosier Park meet from the Millers and trainer Jay Hochstetler. It was only his fifth career start and his first career win. He previously won a qualifier in 1:55.3 at Harrah’s Hoosier Park.

Raes Lucky Charm has a two-year-old brother named Pacing Dream that is set to hit the track in 2022. The colt is by Riggins.