Lester Raber has another quick trotter. Sweet Mr Pinetucky, a son of Pinetucky, defeated a solid field of trotters in the $17,500 Open Trot at Hollywood Dayton Raceway Thursday, Dec. 5. Driven by Michael Oosting, the five-year-old gelding scored the win in 1:55.2. 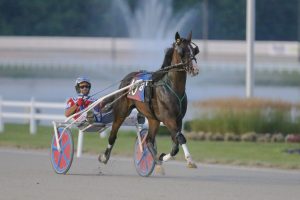 A field of 10 lined up behind the gate for the night’s featured event which included three successful Indiana sired trotters in the mix. Most of the attention was geared toward Churita, who recently went over the $1 million mark in earnings for trainer Matt Rheinheimer following her win during Indiana Sires Stakes Super Finals at Harrah’s Hoosier Park. Also getting some attention as the favorite of the field was Whata Swan from the Luis Quevedo barn. However, it was Raber’s Sweet Mr Pinetucky that grabbed the spotlight and the win.

Starting from mid-pack, Sweet Mr Pinetucky showed little interest in getting involved in the early mix and was near the back of the pack as Churita and Ricky Macomber Jr. established fractions of :27.4, :56.2 and 1:25.3. Around the final turn, Sweet Mr Pinetucky began to find a quicker gear and swept three wide to challenge the top spot. The flashy gelding rallied home in :29.1 to score the win by a head over a fast closing Lindy’s Big Bang and Brett Miller. Signal Hill and Shawn Barker II finished third over Churita for fourth. Whata Swan, driven by John DeLong, made a break at the three-quarter mile marker and finished back at the finish.

Sweet Mr Pinetucky earned his fourth win of 2019 and his 18th overall for Raber who co-owns the gelding with Floyd Raber. The homebred paid $8.00 to win for his victorious effort. Sweet Mr Pinetucky is just shy of $200,000 in career earnings for the Rabers.