Quick N Balanced was a frequent competitor on the Indiana Sired Fair Circuit last year. Now, the three-year-old filly is an Indiana Sires Stakes winner. The Lester Raber-trained sophomore won the only heat of the $12,500 series at Harrah’s Hoosier Park Tuesday, June 18. 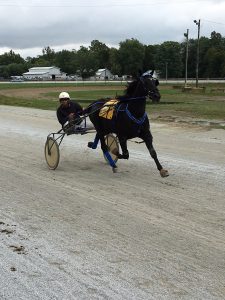 Quick N Balanced, driven by Sam Widger, came into Indiana Sires Stakes action seeking her first win of 2019. She competed in the first round of Indiana Sires Stakes in May, finishing fifth. The Big Stick Lindy filly was ready for the second round, making a move at the half-mile marker that carried her to the front at the head of the lane and onto the finish for the win by one and one-quarter lengths. The timer stopped in 1:57.0, a new career best with a final panel in :28.4. Race favorite Swan In The Valley and Trace Tetrick finished second over New York Nun and Joe Putnam for third.

Raber of Loogootee, Ind. owns Quick N Balanced with Fred Wittmer. She now has two career wins, scoring her only other victory last year at Converse. Her career bankroll is now more than $18,000.

Raber is known for his work with trotters. He developed Swansea, who was sold privately last fall, was developed by Raber. The Swan for All four-year-old gelding is now one of the top older trotters in the nation in 2019 with eight wins and a new lifetime mark of 1:54.3.