Queen of All and Doug Rideout rallied home for a win in the third round of Indiana Sires Stakes for two-year-old trotting fillies Tuesday, Aug. 25 at Harrah’s Hoosier Park. A longshot on the board, the duo paid $55.20 to win for the mile.

Starting from post nine, Rideout left the gate with authority to grab the top spot at the quarter in :27.3 with Queen of All. They were quickly overtaken and shuffled back as Guccio’s Lady and Peter Wrenn took over before the half in :57.2 followed by Treasure Gems K and Ricky Macomber Jr., who led through the three-quarters in 1:26.4. 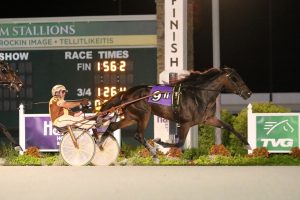 Queen of All and Doug Rideout were upset winners in the third round of Indiana Sires Stakes Tuesday, Aug. 25 at Harrah’s Hoosier Park. Photo by Dean Gillette

In the stretch, Queen of All moved back out and trotted home in :29.0 to secure the win by one and one-half lengths in 1:56.2. Guccio’s Lady finished second over Treasure Gems K for third.

Owned by Julie Rideout, Pete Schmucker Jr. and Glider Stables, Queen of All broke her maiden in the race, which was her sixth career start. The Swan for All filly has not finished worse than third this year with four third-place finishes prior to the Sires Stakes win. She was bred by Marlin Eash of Shipshewana, Ind. She sold at the Hoosier Classic Yearling Sale under the name of Pmscadillacqueen for $24,000.

Earlier in the card, Swift Swanda and Trace Tetrick won the other division of freshman trotting fillies in Indiana Sires Stakes action. The Swan for All filly came rolling at the leaders in the stretch to win by a neck over Four Under par and Rideout in a time of 1:55.2. Shirley Goodness and Peter Wrenn finished third.

Swift Swanda is owned by Anthony Lombardi and The Kales Company and trained by Erv Miller. Lavon Miller bred the filly.

Earlier in the day, Rideout scored three wins on the Indiana Sired Fair Circuit (ISFC) at Converse. Here’s Devotion was dominant in a leg of two-year-old trotting fillies in 2:05.2 with stablemate Miss Greenbacks winning her division in 2:02.2. Both fillies are trained by Rideout.

Rideout also catch drove for Mike Hollenback, winning a division of the three-year-old filly trot with Bountiful Brittney. Th Swan for All filly, also owned by Hollenback with Pete Schmucker Jr., rallied home to a five and one-half length win in 2:02.0.

Joey Putnam also had a big day at Converse. He guided six winners home during the program, all coming in the three-year-old ranks toward the end of the 25-race card.