Indiana pari-mutuel racing is one week away from opening for the 28th season of Standardbred racing and the qualifying list shows it at Harrah’s Hoosier Park Saturday, March 20.  A total of 13 races are slated and are filled with many champions from last year. 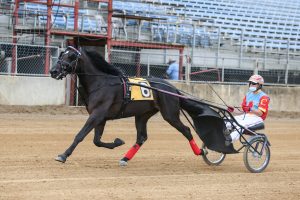 Kicking off the first race will be the second qualifying start of 2021 for Little Rocket Man from the Missy Essig Stable. The five-year-old son of Rockin Image flew home in :25.4 in his qualifying debut last week. He teams up again with John DeLong from post two in the first race.

Seventimesacharm, the full sister to Seventimesavirgin, makes her 2021 debut in the second race for the DeLong Stable. With a career mark of 1:51.1 taken at two, the Always a Virgin four-year-old will begin from post three with DeLong in the bike.

A pair of trotters will start side by side in the seventh race on the day. J-S Jasper and TJ’s Top Pick each make their debut from post four and five, respectively in the seventh race. Now under the direction of Walter Haynes Jr., J-S Jasper scored the victory in the Governor’s Championship last fall at the Indiana State Fairgrounds, a feat he repeated from his two-year-old season. TJ’s Top Pick, now four, hails from the Jeff Cullipher Stable and was the top two-year-old trotting colt in the state two years ago. Haynes will guide J-S Jasper while Trace Tetrick is named behind TJ’s Top Pick.

Qualifiers will begin at 10 a.m. The next set of qualifiers is set for Wednesday, March 24 and will be held in the evening as a dress rehearsal for opening night Friday, March 26.