Although he’s not Indiana sired, Putnams Attack has spent a lot of his career in the Hoosier State. The 14 year-old gelding completed his final lap around Harrah’s Hoosier Park’s oval Thursday, Dec. 8 with a win in the $14,000 Harrah’s Joliet Final for $6,500 claimers. 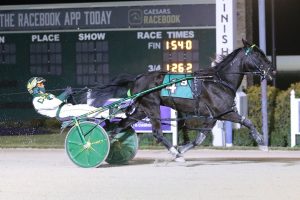 Starting from post four, Putnams Attack and John DeLong slid over to the rail behind early race leader Dialamara and Trace Tetrick. The old timer sat patiently through fractions of :27.1 and :56.1 as the field behind him worked to get settled, sometimes traveling three wide to find the best spot in the one-mile pace.

Around the final turn, Cuzberttoldmeso and LeWayne Miller led the outside charge toward the leaders with Putnams Attack getting out and moving to the lead before they reached the front. In the stretch, Putnams Attack did just that, attacked the stretch with authority and rallied home to a six-length win as the favorite of the field, pacing home in :27.2 for the win in 1:54.0. Royale Rose and Sam Widger finished second, just a neck ahead of Clemson and Jordan Ross for third.

Putnams Attack paid $5.40 as the favorite of the field for the win. The Cookie Dough Boy son, bred in Nova Scotia by Dr. James Shive, is owned by Therl Hensley and trained by Peter Redder. Three horses were claimed out of the race, including Royale Rose, Pirates Alley and Dilamara.

Putnams Attack is in the final month of his career as mandatory retirement is ahead Dec. 31, 2022. Unraced at two, he has competed and won races every year with his six-year-old season at Yonkers being his richest with more than $60,000 earned. After that, his 14-year-old season has been his richest with $48,000 earned thus far. His career mark of 1:50.3 was taken last year at Harrah’s Hoosier Park, and he has been in the Midwest since he was nine years old.

Putnams Attack has been a lifetime claimer and has had 43 different ownerships over the years. He was acquired by Hensley in July of this year and this is the fourth time Hensley has owned the claimer and the fifth time he’s been associated with Redder. To date, he has 51 career wins in 404 career starts with more than $367,000 in earnings. He has five wins in 2022.

Putnams Attack has a tie to Indiana. His mother, All Out Attack, is by Real Desire. He was her first foal and is the richest to date. Four of her six foals have raced and taken marks. The second dam is Panic Attack, which makes All Out Attack a half sister to the standout mare Panned Out, former track record holder at Harrah’s Hoosier Park in the late 1990s and winner of more than $350,000 with a mark of 1:51.1. She has been super successful as a brood mare. Out of 16 foals, 14 have raced and taken marks, including seven six-figure earners. One of those foals is Panther Hanover, who is a sire in the state of Indiana with his most successful foal Hot Mess Express, Indiana sophomore champion last year.