Driver Joey Putnam picked up seven wins on the 19-race program at Goshen, Ind. Monday, Aug. 19. Six of the trips to the winner’s circle were accompanied by Trainer Justin White during the late morning program that kicks off the second half of the Indiana Sired Fair Circuit (ISFC).

Putnam and White connected for a win with Robins On Time in the third race. The two-year-old filly pacer completed a gate to wire effort for the win by nearly nine lengths in a time of 2:00.3. 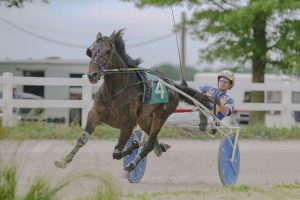 Dance Hall Brawler was one of seven wins on the card at Goshen, Ind. Monday, Aug. 29 for driver Joey Putnam. The photo was taken at Converse earlier this year. Photo by Dean Gillette

Putnam and White were back in the winner’s circle with another Time to Roll freshman as Roll With Time scored a win in the first division of two-year-old colt pacers. Putnam moved the John Schmucker-owned colt to the outside heading to the half and kept chipping away at the lead, finally taking over in the stretch to win by two and one-quarter lengths in 2:02.2.

Kazan’s Power, who has been consistent for Putnam and White all summer, used a first-over trip to win the first division of two-year-old trotting colts and geldings in a time of 2:07.1. Pop Secret, also a multiple winner this season, joined the Cherry Hill Park colt for a win in the third division of the freshman trotting colts in 2:06.1. White and Blue Creek Racing Stable own the Pilgrims Chuckie colt

A gate to wire effort brought Starlit Tuff to the winner’s circle in a time of 2:07.0 for the first division of three-year-old filly trotters. Tom Weigel owns the Mr. Cantab filly trained by White and driven by Putnam.

All for Rocky was the final winner from the White barn in the 18th race of the day, the first division of three-year-old colt and gelding trotters. Putnam placed him on the front end from the start and never looked back to win by nine lengths in 2:03.4.