Driver Joey Putnam and Trainer Justin White reeled in four wins Monday, July 29 at the Fayette County Fairgrounds in Connersville. The duo has been successful all season long and their success continues just in time for the upcoming Indiana State Fair Championships the second week in August. 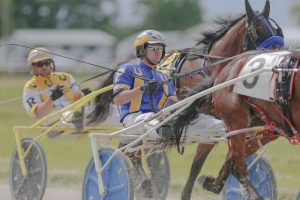 The first win of the day for Putnam and White came in the second race with two-year-old pacing filly Baby Lets Roll. The Time to Roll filly secured the lead just after the quarter mile marker and kept on rolling, winning by five and one-quarter lengths in a time of 2:01.4. The final panel was in :29.3 for the filly that is owned by Tom Weigel.

The first division of two-year-old trotting colts also went to Putnam and White as Kazans Power, also a product of Cherry Hill Park, waited patiently along the inside before pulling out in the stretch and trotting home to a 2:11.1 win. Ryan and Trak Larrabee co-own the gelding with Blue Creek Racing Stable.

The final win on the day for Putnam and White came in the final race of the day in the fourth division of two-year-old trotting colts. Pop Secret was in command from the start, rolling out to an open length advantage throughout before rallying home in :30.3 to win by six and three-quarter lengths for White and Blue Creek Racing Stable, giving the stable their third win on the card.

Racing is back in action at the Fayette County Fairgrounds Tuesday, July 30. First post is 11 a.m.