Fresh off a third place finish in Elite Series action at the Indiana State Fair earlier in the week, Pure Cotton turned in a strong performance in Indiana Sires Stakes action at Harrah’s Hoosier Park Friday, Sept. 3, taking a new lifetime mark of 1:51.4. 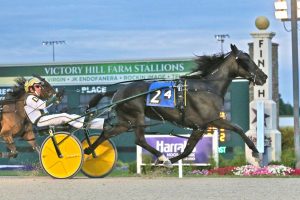 Pure Cotton got away third from her inside post two for catch-driver John DeLong. Race favorite Always A Spinster and Trace Tetrick went out for the early lead and achieved the top spot after the quarter in :27.2. From there, Tetrick was able to get a breather through middle fractions of :56.3 and 1:24.3 before the pace became lively in the stretch.

Pure Cotton got racing room she needed and exploded to the outside, pacing home in :26.2 for the win, just one length ahead of Like It Like That and Darrell Wright. GD Rockin Kay and Michael Oosting finished third.

Pure Cotton was the second longest shot on the board, paying $33.00 for the win. The Rockin Image three-year-old filly is owned by Julie Rideout, Chris Gilbert and Pure Cotton Stables. Merlie Schwartz is the breeder on the filly, who is trained by Doug Rideout.

Pure Cotton is now seven for 19 in her career. With the win in the ISS, she now has more than $64,000 in career earnings for her connections.

In the other division of sophomore pacing fillies, Somethingbeautiful picked up another win. The Always a Virgin filly, driven by LeWayne Miller, took over after the quarter in :26.4 and never looked back, scoring the win by three-quarters of a length over Kobe’s Gigi and Matt Krueger. Skyway Brittney and Sam Widger finished third.

Somethingbeautiful is now four for nine in 2021 and 12 for 20 in her career. She is just shy of $450,000 in career earnings and took a career best time of 1:50.4 in her previous start at Harrah’s Hoosier Park. She is now on a three-race win streak.