Pure Cotton and Trevor Henry turned in a solid performance Thursday, April 29 to win a leg of the Go On BB Series for filly pacers. The win marked the second of the season for Pure Cottom in the first round of the series named for the standout Indiana sired millionaire mare Go On BB. 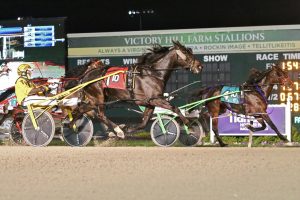 Pure Cotton and Trevor Henry hang on to the win at the wire in the photo finish of the first round of the Go On BB Series at Harrah’s Hoosier Park. Photo by Dean Gillette

Starting from the inside post one, Pure Cotton was able to move out quickly from the gate and get the top spot to lead the way through fractions of :28.3, :57.4 and 1:27.0. Henry kept Pure Cotton focused down the lane but began to feel pressure from both sides by trailing opponents. JB’s Star Dancer and Trace Tetrick challenged along the inside and moved in late, but the tight photo gave Pure Cotton the win by a head at the wire in 1:54.2, a new career best time. JB’s Star Dancer finished second over Alwys At The Beach and Jared Finn for third.

Pure Cotton paid $5.60 for the win for trainer Doug Rideout. The three-year-old Rockin Image mare, bred by Merlie Schwartz, is owned by Julie Rideout, Chris Gilbert and Pure Cotton Stables. The filly made only two starts last season on the Indiana Sired Fair Circuit, winning both events. She is now four for seven lifetime and has picked up more than $16,000 in earnings for her connections, who was purchased from the Hoosier Classic Yearling Sale under the name of Coulditbeme for $10,000.

A native of Ontario, Trevor Henry is a recent arrival to Harrah’s Hoosier Park. With nearly 40,000 career starts, Henry brings in more than 7,000 career wins to Indiana and in excess of $56 million in purse earnings. He established himself as an accomplished trainer and driver at the smaller Canadian tracks before relocating to Woodbine and Mohawk full time in 2014.