The Hoosier Classic Yearling Sale completed another successful weekend, sending 354 yearlings through the sale ring Friday, Oct. 19 and Saturday, Oct. 20 at the Indiana State Fairgrounds. Coming off a record-breaking year in 2017, the prices held fairly steady with the average at $19,449, which was less than one percent of a decrease compared to 2017, according to the Hoosier Classic Yearling Sale website. In all a total of $6.88 million was accumulated on the future stars of the Indiana sired program. 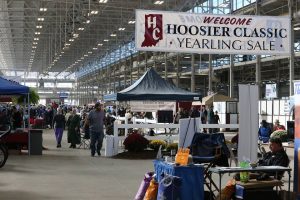 The Hoosier Classic Yearling Sale was jam-packed with prospects for the 2019 racing season and prices held steady coming off a record breaking year in 2017. (Photo by Dean Gillette)

A total of 18 yearlings brought $50,000 or more, with two reaching six figure status. Sale goers had to wait more than halfway through the second session to see the highest price yearling of the sale as Bluebird Keepsake, a Swan for All filly, bringing $125,000 with Dan Shetler signing the ticket as the agent on the filly. She is a first foal out of the race mare Changed it All, who took a record of 1:56.0 at three and earned in excess of $158,000. She is from the family of Armbro Keepsake (the third dam), former Breeders Crown winner and millionaire mare with a mark of 1:54.3. Bluebird Meadows of Middlebury, Ind. was the consignor.

The other horse to reach six figures was by new Indiana stallion Whom Shall I Fear named Meadowbrook Chip. The Kales Company of Bloomfield Hills, Mich. signed the ticket for $100,000. The colt is out of the proven mare Chips Goddess who is the dam of Meadowbrook Grace (1:53.1, $244,150) and Meadowbrook Charlie (1:55.3, $75,535), both by Swan for All. Whom Shall I Fear joined the stallion ranks at Victory Hill Farm. He is a full brother to Father Patrick and his oldest foals are yearlings in 2018.

The highest price pacer walked through the ring on Friday as Justanothermiki (Hip No. 156) brought $87,000. The Always A Virgin colt, out of the mare Artsy Princess, is a first foal from the mare with a mark of 1:52 and nearly $300,000 in earnings. The colt was purchased by Mike Roth, agent for Carl Atley of Anderson, Ind. out of the Homestead Acres consignment.