Priceless represented Indiana in a big way Friday, Oct. 19 during the eliminations of the Breeders Crown Series at Woodbine Mohawk. The two-year-old daughter of Rockin Image posted a commanding win in 1:50.2, the quickest of three eliminations on the card. Trained and driven by Brandon Bates, Priceless is headed to the $600,000 final Friday, Oct. 25. 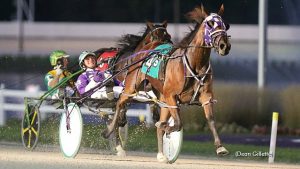 Starting from post five, Bates had Priceless ready to roll as soon as the gate folded, making the top to set the fractions of :26.3, :55.0, and 1:22.4. In the stretch, the freshman filly began to pull away from the field, winning by four and three-quarter lengths with a final panel in :27.3.

It was the seventh win in 10 starts for Priceless, and also a new career best. Owned by Kevin Miller and Bert Hochsprung, Priceless now has in excess of $340,000 heading into the rich final.

Also making her way to the Breeders Crown finals is May Baby, driven and trained by James Yoder. The Guccio filly finished fourth in her division, trotting the mile in 1:54.1. Yoder had the filly on the front from post nine for the first three quarters before being caught in the stretch. Owned by Cheyenne Yoder, May Baby heads into the $600,000 Breeders Crown final Friday, Oct. 25.