Indiana sired Pretzel Party earned another win Thursday, March 19 at The Meadows. The four-year-old daughter of Mr Cantab fought off a late challenger for the win in 1:57.0 with Ronnie Wrenn Jr. in the bike. 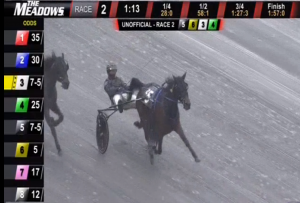 Pretzel Party and Ronnie Wrenn Jr. fend off a late challenger for the win at The Meadows Thursday, March 18.

Pretzel Party started in mid pack and made her intentions known early, going straight to the lead to pass the quarter in :28.0. After allowing Cash for Gold and Brady Brown to clear to the lead, Pretzel Party retook the lead at the half in :58.1. From there the trotting mare had complete control of the tempo. In the last turn, horses fanned three-wide to challenge Pretzel Party in the stretch, including Call to Post, widest of all with Tony Hall driving.

In the stretch, Pretzel Party had a big lead on the field, but Call to Post was closing with every stride. In the end, it was Pretzel Party by a nose for the win. Delcrest Holiday and Dan Charlino finished third.

Pretzel Party is owned by Denise Dennis of Indianapolis and John Johannsen of Delaware. The duo purchased the filly for $14,000 at the Hoosier Classic Yearling Sale. She was only one of 16 sold at public auction that year. Hoosier Standardbred Farm and Fair Meadow Farm bred Pretzel Party.

Trained by Richard Perfido, Pretzel Party now has two wins on the year for her connections. Her career best time stands at 1:55.0 taken last year at Harrah’s Hoosier Park. She now has seven career wins in 41 career starts with earnings over the $184,000 mark.