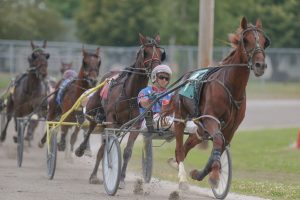 Fast Freddy Jo Jo and Mike Peterson are shown winning one of their races earlier this year at Frankfort. The two-year-old has won four of his last six starts this season. Photo by Dean Gillette.

Before venturing into ISS action, Fast Freddy Jo Jo had won four of his last five starts on the ISFC. The Time to Roll two-year-old pacer’s quickest time was taken at Converse in 2:02.3. He hails from the Larry King barn and has been driven exclusively by Mike Peterson this season. They will be featured in the first of two divisions for freshman pacing colts and geldings.

Also looking to extend her wins is Summit City Swan from the Byron Hooley Stable. The three-year-old trotting filly has won eight of her 15 starts this season with the quickest in 1:55.0 at Harrah’s Hoosier Park. The Swan for All filly is currently on a four-race win streak, including the Maple City Trot win in her last start at Goshen. Derek Hooley has the assignment from post two in the second race of the day.

Pop Secret from the Justin White barn will be looking for his third straight win in the two-year-old trotting ranks. The Pilgrims Chuckie colt has won five of eight starts this year with Joey Putnam at the controls. Pop Secret’s best record this year is 2:06.3 at earlier races at Portland this summer. He starts from post two in the eighth race.

Racing begins Friday at the Jay County Fairgrounds at 11 a.m.