Pond-A-Acres has had several top performers on both the trot and the pace over the past few years, and now, a new crop of two-year-olds is emerging to keep the momentum going. One of those freshman is Ponda Jet from the Jay Hochstetler barn who earned his first win Friday, July 1 at Harrah’s Hoosier Park. 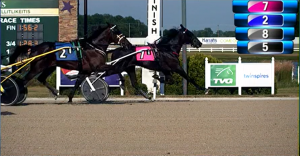 Ponda Jet, driven by Homer Hochstetler, scored his first career win to kick off the month of July at Harrah’s Hoosier Park.

Guided by veteran driver Homer Hochstetler, who is known for his expertise with trotters, the high stepping Ponda Jet fired out of the gate and got to the lead by open lengths, setting the first quarter in :27.1. Hochstetler had a snug hold on the Dover Dan gelding down the backside and was able to get a bit of a breather for the second half, passing by the second pole in :58.1. Around the turn Empire Builder and Michael Oosting moved to the outside to lead the charge toward the leaders, but Ponda Jet was too strong on the lead. He led the way into the stretch by three lengths.

Turning in a final quarter of :27.4, Ponda Jet was well under wraps as he crossed under the wire for the win. Empire Builder held strong on the inside while Swampy Joe and Trace Tetrick closed the quickest on the outside, trotting home in :26.0 seconds for third.

Ponda Jet was the favorite, paying $4.80 for the win. It was the second career start for the gelding, who finished second in his racing debut. He is owned by Connie Hochstetler, Robert Buddig and Allen Schwartz. The second generation gelding from Pond-A-Acres is out of Ponda’s Lucky Lady, who also has a yearling named Ponda Asset, a colt by Swan in a Million that will be ready for the yearling sales this fall.

Later on the card Friday at Harrah’s Hoosier Park, Sectionline Bigry and Brandon Bates turned in the fastest mile of the meet so far in the $22,000 Open Pace. The duo turned in a gate to wire effort with matching first and fourth quarters of :25.4 for the win in 1:48.0. Tellmeaboutit and Michael Oosting finished three-quarters of a length back in second over Rockin Speed and John DeLong for third. The entire field closed in under :26 seconds, showing the caliber of horse power in the race. The sixth place finisher, Play Me Rock, paced his mile in 1:49.1.

Sectionline Bigry is owned by Harold Bauder and trained by Stee Bauder. The seven-year-old son of Pet Rock earned his 12th win of 2022 and his 43rd overall. With 104 career starts, he now has more than $885,000 in earnings. His latest mile is a new lifetime best, eclipsing his former mark of 1:48.1 taken at Harrah’s Hoosier Park as a five-year-old.