Play to the Crowd dug deep to score an upset win at Monticello Raceway Monday, Nov. 21. The Indiana sired mare led two other longshots to the winner’s circle with big payouts across the board, including fellow Indiana sired mare Firstup, who finished third. 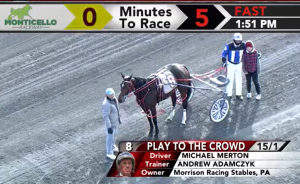 Play to the Crowd wins at odds of 15-1 Monday, Nov. 21 at Monticello. The Indiana sired mare carrys on the winning tradition of three generations of racehorses for the Conrad family.

At the three-quarter mile marker, Play to the Crowd looked to stall on the outside but regained some momentum in the final turn. At the top of the stretch, the mare took over and fought off challengers from all sides for the win by three-quarters of a length in 1:58.1. Earlybird Special and Shane Taggart finished second over Firstup, an eight-year-old mare by Rockin Image, for third with Shawn Simons driving.

Play to the Crowd is owned by Morrison Racing Stables and trained by Andrew Adamczyk. Roselea Conrad and Fred Schroeder Jr. bred the Always a Virgin mare, who earned her fourth win of the season. Overall, she has 27 wins in 135 starts and earnings of more than $125,000. Her quickest time of 1:53.4 was taken last year as a five-year-old at Pompano Park.

Play to the Crowd is out of the mare Forever Showin Off, who was also campaigned by the Conrad Stable. The Allamerican ingot mare won 32 races and more than $329,000 during her racing career. Her best time of 1:51.4 was taken as an eight-year-old at then Indiana Downs. Play to the Crowd is the third generation from the family as Conrads also raced her great grandmother Muskoka Opal, who has a mark of 1:54.2 and $36,000 in earnings. She is a full sister to Moscato, who has a mark of 1:55.4 and more than $35,000 in earnings.