Play for Pay, the former Indiana Sires Stakes champion, earned a win in Ohio Friday, Jan. 29 at Miami Valley Raceway. The five-year-old daughter of Tellitlikeitis scored a win in the $16,200 conditioned pace with Kayne Kauffman at the controls. 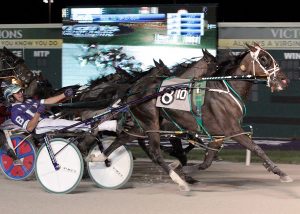 Starting from the center of the track, Play for Pay rolled out quickly from the gate to secure the top spot before the quarter in :27.3. From that point home, the mare controlled the tempo, posting fractions of :55.2 and 1:23.2 before facing a big challenge in the stretch.

Several horses came at Play for Pay in the final strides, but she was able to hold them off for the win by a head in 1:52.2 in the three-horse photo. Gone Girl and Tyler Smith finished second over Summer Charm and John DeLong for third.

Play for Pay paid $5.00 for the win. She is trained by Mike Arnold and owned by Ira Steinberg of Illinois. Diana Wilson bred the mare, who was part of the first crop by Indiana sire Tellitlikeitis. Play for Pay now has 11 career wins in 52 career starts. With more than $250,000 in earnings, her career best time remains at 1:51.0, a mark she set as both a three and four-year-old. Steinberg has owned the mare her entire racing career, purchasing her for $15,500 from the Hoosier Classic Yearling Sale.

Other Indiana winners on the Friday card included Franzo, a nine-year-old son of Rockin Image owned and trained by Adam Short and driven by Sam Widger in a time of 1:53.3, Sweet Sally Sue, a four-year-old daughter of Panther Hanover owned by Bartley Traditions Racing and trained by Jimmy Lupton, who won for Chris Page in 1:54.1, and General Dolan, a six-year-old son of Rockin Image driven to victory by Widger for owners John and Robert Esposito under the direction of trainer Robert Phillips. General Dolan scored the win in 1:51.1.