Tracks continue to close racing programs across the nation and Pompano Park announced Wednesday, March 18 would be their final racing program. Rick Plano, based in Indiana, won two of the races on the final card with two trotters familiar to Indiana racing fans. 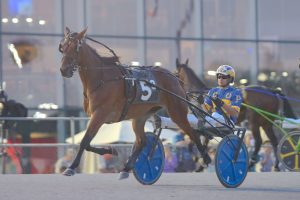 Keegan Ho, a seven-year-old son of Mr Cantab, scored the first win of the night for Plano in the $9,000 Open III Trot. Starting from post two, the gelding rallied along in mid pack early before pulling out and securing the lead at the half in :56.4. From there, he kept distance between himself and the rest of the field, pulling off a four and one-half length victory in 1:55.0 for trainer-driver Plano. Groovey Kid and Wally Hennessey finished second over Billie Blue and Peter Wrenn for third.

Owned by Plano in partnership with Jan Repko and Mindy Findling Repko, it was the fifth win in 10 starts for 2020 for Keegan Ho. He now has 27 career wins and in excess of $222,000 in career earnings. Earlier this season, he took a new lifetime mark of 1:53.3.

Later on the card, Plano guided Sooo Handsome to victory in the $10,000 Open I Trot. The seven-year-old son of Cash Hall, bred by Plano in Indiana, traveled along near the back of the pack before making a big move to the leaders and being a major threat at the top of the stretch. He dug in gamely to the wire to outlast The Lionking AS and Kevin Wallis, winning by one-half length in 1:55.1. Perfect Chapter AS and Peter Wrenn finished third.

Owned by Maryann Plano, Sooo Handsome has 38 career wins in 166 career starts. He is nearing $300,000 in career earnings and took his career best time of 1:52.4 at Harrah’s Hoosier Park last summer.