Rick Plano has had an illustrious career in harness racing. The New Yorker who now calls Indiana home has won races from coast to coast. It’s no wonder he recorded his 4,000th training victory at Harrah’s Hoosier Park Wednesday, June 23. 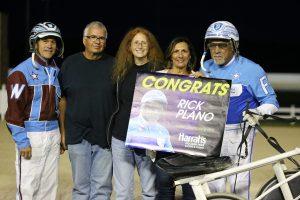 Plano guided Empressive Hill to victory in the evening’s ninth race. The three-year-old Muscle Hill gelding had the early lead before relinquishing the top spot to J-S Jasper and Brandon Bates after the quarter in :28.1. From there, Empressive Hill challenged for the lead, getting the advantage in the stretch and pulling away to a three and three-quarter length win in 1:54.4. J-S Jasper finished second over Creemore and Verlin Yoder for third.

It was the first start of the year for Empressive Hill, who only finished worse than third twice in seven starts last year at two. He is owned by Jordan DeRue, Bruce Soulsby, Alan Weisenberg and Gil Short. He was purchased by his current owners last September.

Plano now has 4,000 career wins in 24,149 starts. Horses under his care have earned in excess of $20 million over his career, which has spanned the past 30 years as a trainer. Plano, who has been driving horses since the 1970s, has more than 7,100 career wins as a driver with more than $32 million in accumulated purses.