Deena Pitman, longtime member of the Indiana Horse Racing Commission (IHRC), has been named the new Executive Director. Pitman moves into the position for the departing Mike Smith, who is retiring. 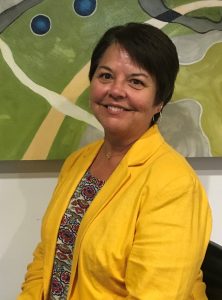 Deena Pitman will serve as the new executive director for the Indiana Horse Racing Commission. A longtime team member of IHRC, Pitman replaces Mike Smith, who is retiring. Photo by IHRC

Pitman joined the IHRC in 1993 as the first licensing supervisor. She was instrumental in developing the current licensing system for Thoroughbred, Standardbred and Quarter Horse racing and the related licenses associated with the Indiana racing industry such as the vendor and operator licenses. Pitman moved into the role of assistant executive director (deputy director) in 2000, the position she currently holds. She has assisted with all aspects of the horse racing industry and has worked through many transitions since the inception of racing in the state of Indiana in 1994, including the addition of slot machines at racetracks, multiple track ownership changes and the current breed development program for the state.

Pitman received the 2017 ISA President’s Award, which is presented to a recipient that has gone above and beyond for the Indiana Standardbred Association.

“Deena’s longevity with the Commission enables her to provide a unique perspective to this role which no other candidate had,” stated IHRC Chairman Phil Borst through an IHRC press release. “The knowledge and experience she brings with her is unmatched, making us confident that she will continue to move Indiana horse racing forward.”

In addition to Pitman’s promotion, Thomas Linkmeyer has been hired to fill the role of deputy director. Linkmeyer is an owner, trainer and driver in Indiana with an extensive background in business and management.

Smith, who announced his retirement earlier this year, will help both Pitman and Linkmeyer transition into their new roles.