A new year brings in a new round of potential stars in Indiana. After finishing fifth in nine starts as a two-year-old, Piningforgold proved a new year is what he needed to score his first win. 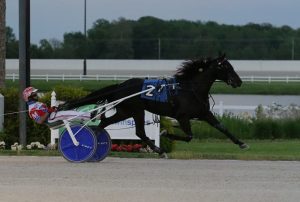 A son of Muscle Massive, Piningforgold and LeWayne Miller started from post two and secured the third spot as Starlitcresentroll and Don Eash set the first fraction of :29.0. Piningforgold was out and moving to the lead at the half in :58.2, sliding over to the top spot heading into the final turn. From there, Miller let the sophomore trot. He moved away from the field by four at the top of the stretch and increased his lead to six and one-half lengths at the wire, posting a final quarter in :28.4 for the win in 1:56.1. Scorecard Dan and John DeLong finished second over Spent and Sam Widger for third.

Piningforgold paid $7.00 for the win. The gelding is owned by Nathan Yoder and was bred by Alvin and Harvey Fry. Piningforgold increased his career bankroll to more than $20,000 with his first win. He is part of the first Indiana crop by Muscle Massive and was one of 46 that sold at public auction. He was purchased out of the Hoosier Classic Yearling Sale for $5,000.

Another first time winner on the Thursday, May 19 card at Harrah’s Hoosier Park was Twentysevenbelow, trained by Missy Essig. The sophomore JK Endofanera was unraced last year at two and made his fifth start of the year a winning effort, pacing home in :26.4 to score his first win in 1:55.3. Ben Racin and Michael Oosting finished three-quarters of a length back in second over HC Commander and Sam Widger for third.