Pine Dream and driver Brandon Bates earned a commanding win in a division of the Leonard Perrin Memorial series Saturday, April 17. The race was part of Leg 2 of the series and gave Pine Dream his second win of 2021. 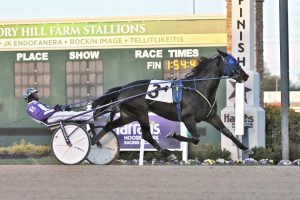 Pine Dream and Brandon Bates were dominant winners in a division of the Perrin Memorial Saturday, April 17 at Harrah’s Hoosier Park. Photo by Dean Gillette

Bates had Pine Dream ready to roll when the gate sprung and had the early advantage on the inside until Foxy Trottin Stick and Sam Widger took over on the outside at the quarter in :27.4. From there, Pine Dream rode right on Foxy Trottin Stick’s back through the half in :57.2 before Always Be with You and Michael Oosting created the outer flow and moved up on the outside to challenge. In the stretch, Pine Dream found the room he needed to get out and trot home in :27.0 for the win by two and three-quarter lengths in 1:54.4. For a Dreamer and John DeLong closed well to finish second over Always Be with You for third.

Trained by Merv Chupp, Pine Dream paid $12.20 for the win. The Pinetucky nine-year-old gelding is owned by Chupp Racing Stable and was bred by Oakwood Farms. Pine Dream now has 43 career wins in 179 career starts. He has been a consistent performer since his two-year-old season, racking up more than $400,000 in career earnings. His career best time of 1:53.1 was taken as a six-year-old at Miami Valley Raceway. Pine Dream has been part of the Chupp Stable for the past two and one-half years.

Earlier on the card, Milford’s Z Tam and Trace Tetrick scored a hard-fought win in a division of the Frank O’Mara Memorial. The eight-year-old Swan for All gelding was able to reach the wire first in 1:55.3 with a final panel of :26.4 for the win. ER Kim and Bradley Ferguson finished a neck back in second while Thunder and Michael Oosting were also involved in the photo finish for third.

Milford’s Z Tam is trained by Michael Hitchcock and is owned by William Hartt of Maine. Alan Troyer bred the gelding who now has 24 career wins in 159 starts with earnings in excess of $416,000.