Pilgrims Image has had quite a year for owner-trainer Lester Raber. The Indiana sired horse won several races on the Indiana Sired Fair Circuit, finished second in the Elite Series, just missed the title in the Harrah’s Louisiana Downs Series Final at Harrah’s Hoosier Park, and now adds another win to his credentials with his latest effort at Hollywood Gaming Dayton Monday, Dec. 20. 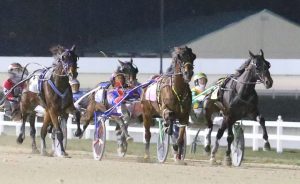 Pilgrims Image, shown on the side during the stretch drive of the Harrah’s Louisiana Downs Mini Series Final, scored his 14th win of 2021 at Hollywood Gaming Dayton Monday, Dec. 20. Photo by Dean Gillette

Driven by Jordan Ross, Pilgrims Image got away in mid pack of the $13,500 conditioned trot. Ross sat patiently through the first quarter in :28.3 before being flushed to the outside before the half in :59.1. Pilgrims Image continued to creep up on the leader, Trumpeter Swan and Kayne Kauffman until he was able to clear at the top of the stretch.

In the stretch, Pilgrims Image took over and trotted home in :28.4 for the win by two and one-half lengths in 1:57.1. MVP L and Tylor Lough finished second over Boom Dynamite and Tony Hall for third.

Pilgrims Image paid $8.80 for the win. It was the 14th win on the year for the Pilgrims Chuckie gelding, who has 16 career wins. The three-year-old gelding was bred by Walter Hilty and now has more than $69,000 in career earnings. His best time of 1:56.1 was taken in late November at Oak Grove in 1:56.1.

Pilgrims Image was one of 10 sold as a yearling He was the most inexpensive of the group by Pilgrims Chuckie, being knocked down in the sale ring for $3,200 at the Michiana Classic Yearling Sale. From limited foals since arriving in Indiana in 2014, Pilgrims Chuckie, a former world champion with more than a half-million in earnings and a mark of 1:53.0, has sired five with marks under the 1:55 time barrier. Pilgrims Image is now the fifth richest foal. Mr Quaker is the most successful with a mark of 1:54.3 and more than $185,000 in earnings.

Pilgrims Image is the last foal from the Balanced Image mare Iveyleagueprincess. She has also produced Classy Prince, Well Schooled and Harvard Guy who have all taken marks during their racing careers. Pilgrims Image is now the quickest and the richest of her eight foals.