A total of 22 races will be contested in the penultimate Indiana Sired Fair Circuit (ISFC) Second Chance series Saturday, Sept. 21 at the Jay County Fairgrounds in Portland. Racing begins at 11 a.m. 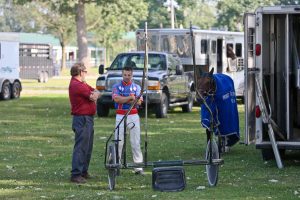 Mike Peterson takes a break from racing last year at the Jay County Fairgrounds in Portland. He has several live starters on the 22-race card Saturday, Sept. 21. Photo by Dean Gillette

Three-year-old pacing colts and geldings will kick off the card with three divisions dedicated to the sophomores. Hayswood Ron from the Larry King Stable will seek to add to his five wins for 2019 in the third division. The He’s Gorgeous gelding, who only started three times at two with two wins, will start from post two with driver Mike Peterson aboard. Larry King trains Hayswood Ron who is owned by King Racing Stable and Jim Hays.

Peterson will be right back in action in the following race in the first division of sophomore filly pacers with Faye’s Jet Mile. The Jereme’s Jet daughter, who is trained by Peterson, has five wins this season and took a career best time of 1:58.3 earlier this summer at the Elkhart County Fairgrounds. Owned by Lance Adkins of Losantville, Ind., who also bred the filly from his mare, Six Mile Annie, Faye’s Jet Mile starts from post three in the six-horse lineup.

Peterson and King team up again in the third division of three-year-old pacing fillies with Miss Fire, a winner of three races this year. The Straight Shooting filly, owned by King Racing Stable, stars from post two in the sixth race of the day to wrap up three-year-old pacing action on the card.